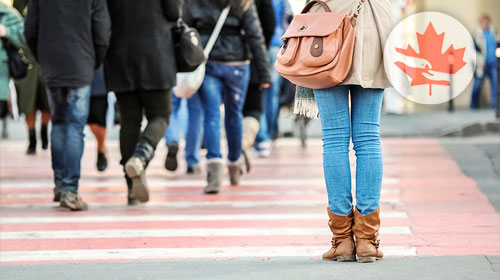 Being a pedestrian can be risky in any city, but Toronto residents take their lives into their hands every time they step out onto the streets.

Whenever there is a problem, you will find someone with an opinion about what caused it. These opinions can be a useful starting point in determining the actual cause, but all too often people accept
them as fact, without finding out the truth.

Data from actual accidents shows that the following popular ideas are actually misconceptions:

What Makes Being a Pedestrian in Toronto so Dangerous?

Accidents can really happen anytime, anywhere, but statistics show that more pedestrian accidents seem to coincide with certain conditions, such as:

What About Vision Zero?

Because this problem has been around for a very long while, people looked to the government to intervene. The proposed solution, called Vision Zero, was inspired by a Swedish plan of the same name which seemed to be very successful in reducing pedestrian deaths. Versions of the Vision Zero plan have been implemented in 30 North American cities.

Although this sounds like a great plan, pedestrian accidents have increased since the time of its inception. Critics have different opinions and there is no unanimous view of why our version of Vision
Zero isn’t working as expected. Some factors include:

What Should I Do if I’ve Been Injured, or if My Loved One Was Killed in a Toronto Pedestrian Accident?

Toronto pedestrian accidents can be devastating. It’s important to seek medical attention as soon as possible after the accident, even if you don’t feel that your injuries are serious. When you are struck by an automobile, a great deal of force is quickly transferred from the vehicle to your body. The full extent of your injuries may not be obvious until much later, but it’s best to act soon, because your body is best able to heal in the months after the accident. The right treatment at the right time will ensure that your body heals correctly, with the greatest range of motion possible.

Once you’ve seen your doctor, it’s a good idea to contact an experienced personal injury lawyer. Without the help of a lawyer, it may be difficult to get the care that you need in order to make the best recovery possible.

If you’ve lost a loved one in a pedestrian accident, your attorney can make sure that you get the compensation that you deserve to cover the expenses that you face now and will face in the future.

How Do I Find the Best Toronto Personal Injury Lawyer?

At Claim Accident Services, matching you with the lawyer that best fits your needs is what we do best. We take the time to listen to the details of your accident and connect you with the right lawyer for your
situation.
Call us today to find out how we can help put you on the road to recovery.