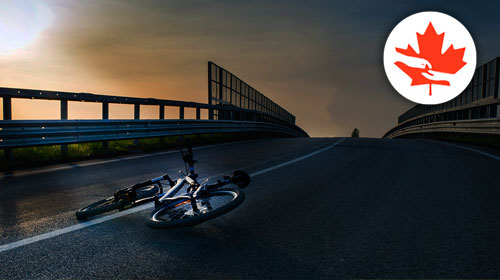 Cycling has become one of the most common methods of transport whether its commuting to work, getting exercise, competing, or most commonly enjoying a nice bike ride. In Canada, the number of people commuting using bicycles has nearly doubled over the past 20 years. The shift in transport occurred due to the average commuting times in some of Canada’s largest cities, causing a 10% decrease of people nationwide commuting by car. Cities including Toronto, Montreal and Vancouver are seeing for the first time a decrease in car commuters in over 20 years.

In recent years, due to the vast increase in bicycle commuters. Sharing the road amongst car commuters has become a common issue. Canadians believe that motorists and cyclists should maintain a high level of alert and must not get distracted while driving only a meter away from cars. Maintaining such a distance prioritizes safety for both the car and bicycle operator. Due to certain circumstances and the increase in bicycle commuters, accidents between these two groups of commuters have increased drastically. Both parties need to always understand the regulations when sharing the road with either party. From a cyclist’s perspective maintaining a distance, shoulder checking and turning /changing lanes is extremely crucial when considering
safety. From a car commuters perspective keeping a distance, as well as checking your blind
spots when sharing the road is pivotal.

In Canada an average of 74 Canadians lose their life in a cycling collision yearly. Out of the 74 deaths, 73% of those collisions are involved with a motor vehicle. It has become more common for male cyclists to get into accidents based on Stats Canada’s finding, for every female fatality almost 6 male cyclists lose their life. Majority of those males coming from the demographic cohort aged 50-64 years. Contributing to almost one third of cyclist deaths in Canada (27%).

One of most common reasons bicycle collisions result in fatalities is due to not wearing a helmet. It is recorded that females on average tend to wear a helmet more frequently than males, 49% of women vs 43% of males. Furthermore, 34% of male cyclists who lost their lives in a bicycle collision were not wearing head protective gear. Compared to females, 21% didn’t wear a helmet in a fatal collision. Over 44% of cyclists aged 20 and under have contributed to fatal collision while not wearing protective head gear. Followed by cyclists aged 20-34 years old who contributed one-third related deaths. When comparing fatality occurrences, only 13% of
victims who were wearing protective head gear were involved in a fatal collision. There is clear discrepancy between statistics, displaying how important it is to always wear protective head gear when on a bicycle.

It is extremely important for a cyclist to understand the necessary regulations, laws and attire when commuting on a bicycle. The other involved party most commonly car commuters are required to follow the necessary laws and regulations when driving alongside cyclists. As they are the number one commuter to be involved in cyclist collisions.

Based on statistics, cycling fatalities are most common during rush hour periods. Fifty one percent of cycling fatalities are between 4:01pm and 8pm. More commuters on the road indicate a higher chance of collision. Furthermore, urban settings account for most cycling deaths when compared to rural settings. More people, means more commuters, therefore a higher chance for collision.

Based on the above statistics relating to how cyclist fatalities occur and why, safety concerns become a crucial aspect for a cyclist to adopt into their daily riding. Understanding the laws and regulations while being attentive can save your life during your commute. As a cyclist there are many tips available which will keep yourself and other road commuters safe.

Prepping for your commute such as making sure your tires are inflated and checking your brakes/ chains is the first step when making sure to have a safe commute. Moreover, Understanding the laws for cyclists in your area is crucial. This includes making sure you have a bell to communicate with other road user, as well as always wearing a helmet and never riding on the road or sidewalk but rather in the designated cycling lane.
Getting visible for other fellow commuters is crucial when maintaining safety. As a cyclist, wearing reflective and colourful clothing helps fellow car commuters and other cyclists to see you clearly. Furthermore, riding with care and being distracted free is always necessary.

Attempt to make predictable movements and position yourself effectively on the road to avoid common collisions. It is recommended to not use mobile devices and headphones when on the bike as they pose as a distraction.

Since cyclists are allowed to use the same roads as cars, obeying the road rules such as traffic signals and right of way will allow for everyone’s commute to be safe and regulated. Passing other vehicles unless you are in the cyclist lane is illegal, it is common for cyclists to disobey passing regulations as certain roads don’t contain bicycle lanes. If you are sharing a road with a motor vehicle it is important to maintain speeds under 15km/h to respect pedestrians and other commuters.

Majority of the time bicycle accidents affect the victim’s knees, head, neck, back or wrists. As well as foot numbness and tingling which are common complaints. Regarding knee injuries, cyclists complain about a pain surrounding the kneecap or outer knee pain. Knee injuries tend to be a result of overuse. One of the most common injuries suffered by cyclists are injuries to the head. This includes cuts on the face or traumatic brain injuries. Injuries relating to neck and back pain, are a result of positioning for a long period of time. Handlebars being too low, or seats not being adjusted correctly to the individual’s height, can cause posture issues while riding affecting the back and neck. Cyclists develop wrist pain when absorbing bumps on the
road or path. It is common to develop wrist pain when riding with your elbows straightened out.

If you or a loved one have been involved in a cycling accident. Seek immediate medical attention and notify a trusted personal injury lawyer so you can receive fair compensation to cover your rehabilitation expenses and loss of income. Taking immediate action and providing the necessary videos/pictures of the accident scene will help you develop a stronger case.

Overall, it is extremely important that as a cyclist you do the following things to keep yourself and other commuters safe while sharing the road. Understanding the laws and regulations associated with riding your bicycle in Canada is the first thing you should do. Secondly, prepping yourself and the bicycle is always important. This includes, putting on the necessary lighting on the bike, dressing up in bright clothing and checking to make sure you are not using a faulty bicycle. Planning your route ahead of time allows you to understand areas with bike lanes and areas with heavy traffic. Most importantly wear a helmet and be extremely attentive and cautious when sharing the roads with other commuters. Everyone wants to get to where they are going safely. Thus, obeying rules and regulations is extremely important.