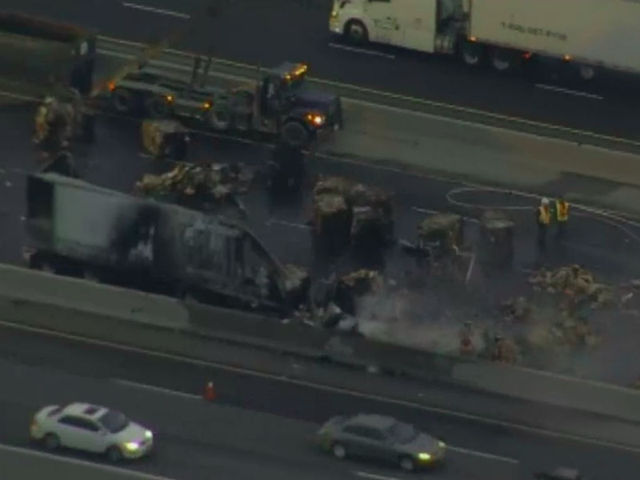 A multi-vehicle car accident happened around 2am Friday morning. A truck has struck a Ministry of Transportation vehicle and two more cars parked on the shoulder.

All vehicles were on duty, cleaning the previous MVA happened earlier. As a result of the collision, fires started.

An OPP Sergeant Carey Schmidt informed that the previous incident took place around 9 p.m. on Thursday. Two vehicles were involved.

As they were cleaning up, a transport truck came in a struck one of the blocker trucks, MTO crash trucks, and then it hit one of the tow trucks and this service truck that was cleaning up the diesel in this first collision.

The truck driver got personal injuries and was transported to the hospital nearby, as well as one of the workers on the scene who got serious injuries as well.
OPP say the tractor-trailer driver was taken to hospital with non-life threatening injuries while a worker on scene was also seriously injured.

The eastbound express lanes of Highway 401 at Morningside remains closed until noon due to investigation and cleanup going on.